The Facebook Presto team has been collaborating with Alluxio on an open source data caching solution for Presto. This is required for multiple Facebook use-cases to improve query latency for queries that scan data from remote sources such as HDFS. We have observed significant improvements in query latencies and IO scans in our experiments.

We found Alluxio data caching to be useful for multiple use-cases in the Facebook environment. For one of the Facebook internal use cases we observed query latencies improved by 33% (P50), 54% (P75), and 48% (P95). We also recorded 57% improvement in IO for remote data source scans.

Presto's architecture allows storage and computation to scale independently. However, scanning data from remote storage can be a costly operation, and it makes achieving interactive query latency a challenge.

To solve sub-second latency use cases, we decided to implement various optimizations. One important optimization was to implement a data cache. Data caching has been a traditional optimization technique to bring the working dataset closer to the compute nodes and reduce trips to remote storage to save latencies and IO.

The challenge was to make the data caching effective when petabytes of data get scanned from the remote data sources with no fixed pattern. Another requirement for data caching to be effective was to achieve data affinity in a distributed environment like Presto.

With the addition of data caching, the Presto architecture looks like the following: 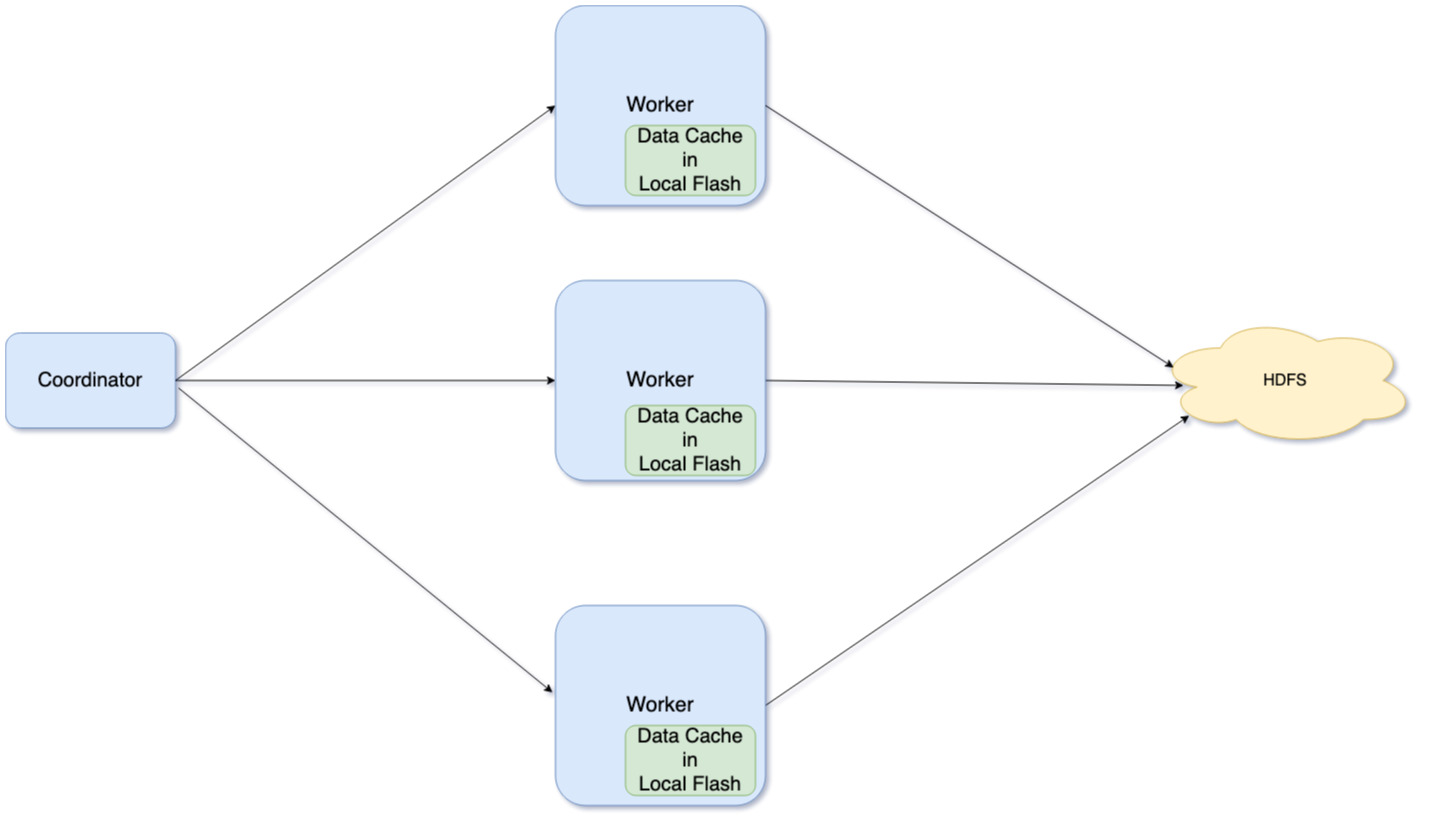 More on this is covered in later sections.

Presto’s current scheduler takes the worker load into account when distributing the splits, such scheduling strategy keeps the workload distribution uniform among workers. But from the data locality perspective, it distributes splits randomly and not necessarily guarantees any affinity, which is required for any meaningful data caching effectiveness. It is critical for the coordinator to leverage the same worker for a split which may contain the data for it in its cache. 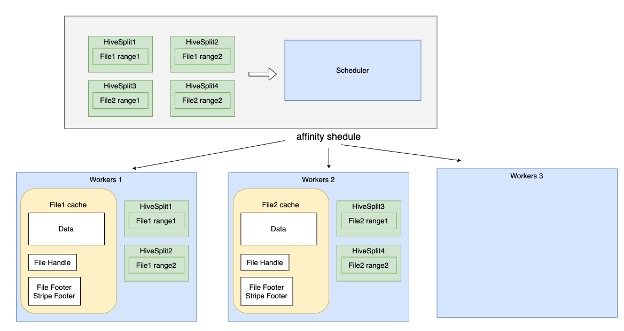 The above diagram illustrates how affinity scheduling distributes various splits among the workers. 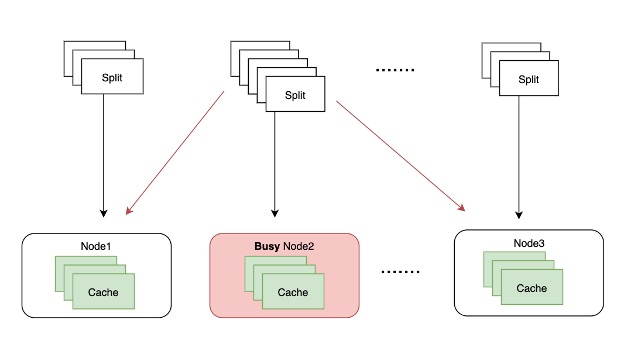 The definition of a busy node is defined by two configs:

Once the number of splits on one node exceeds one of the above configured limitations, this node would be treated as a busy node.

As it can be observed, node affinity is absolutely critical for cache effectiveness. Without node affinity, the same split may be processed by different workers at different times, which can make caching the split data redundant.

Alluxio file system is an open-source data orchestration system that is often used as a distributed caching service to Presto. To achieve sub-second query latencies in our architecture, we want to further reduce the communication overhead between Presto and Alluxio. As a result, core teams from Alluxio and Presto collaborated to carve out a single-node, embedded cache library from the Alluxio service.

In particular, a Presto worker queries this Alluxio local cache inside the same JVM through a standard HDFS interface. On a cache hit, Alluxio local cache directly reads data from the local disk and returns the cached data to Presto; otherwise, it retrieves data from the remote data source, and caches the data on the local disk for followup queries. This cache is completely transparent to Presto. In case the cache runs into issues (e.g., local disk failures), the Presto reads fall back to the remote data source. This workflow is shown as the figure below. 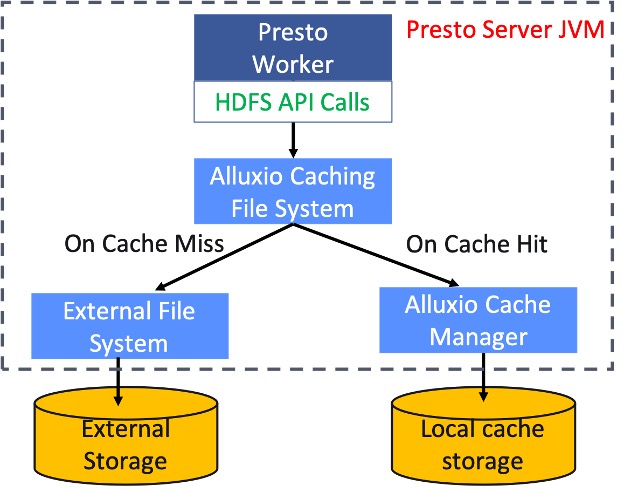 Our Alluxio data cache is a library residing in the Presto worker. It provides an HDFS-compatible interface “AlluxioCachingFileSystem” as the main interface to Presto workers for all data access operations.
These are some design choices under the hood:

Both Alluxio experience and earlier experiments from the Facebook team suggested that reading, writing and evicting data in a fixed block size is most efficient. In the Alluxio system the default caching block size is 64MB. This is fairly large mostly to reduce the storage and service pressure on the metadata service. We significantly reduce the caching granularity because our adaptation of the Alluxio data cache keep track of data and metadata locally. We default the cache granularity to units of 1MB "pages".

By default, Alluxio local cache stores data into the local filesystem. Each caching page is stored as a separate file under a directory structure as follows:

Each Presto worker keeps a set of threads, each executing different query tasks, but sharing the same data cache. Thus this Alluxio data cache is required to be highly concurrent across threads to deliver high throughput. Namely, this data cache allows multiple threads to fetch the same page concurrently, while still ensuring thread-safety for evictions.

We benchmarked with queries from one of our production clusters, which was shadowed to the test cluster.

Cache hit rate was pretty consistent and good during the experiment run. It remained mostly between 0.9 and 1. There were a few dips that could be noticed, these can be the result of a new query scanning lots of new data. We need to implement additional algorithms to prevent less frequent data blocks to get cached over more frequent data.

How to use it?

In order to use data caching the first thing we need to do is to enable soft affinity. Data caching is not supported with random node scheduling.
Set following configuration in the coordinator to enable soft affinity:
"hive.node-selection-strategy", "SOFT_AFFINITY”
To use the default (random) node scheduling, set it to
"hive.node-selection-strategy", "NO_PREFERENCE”

Here are some other configurations which can useful:
Coordinator configuration (useful to configure the definition of a busy worker):